All my dreams are coming true 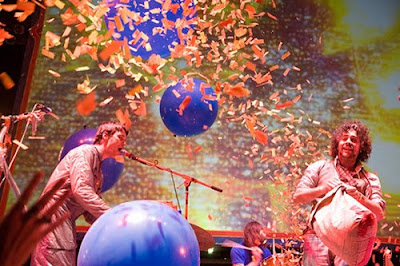 I always said that if the Flaming Lips ever came back to Maine I would drag my best girlfriends to see them with me, because if you have never seen them live you are missing out.

I don't care if you like their music or not, go see them live.

Attending one of these concerts is like being inside a giant, technicolor Japanese birthday cake and you are guaranteed to leave happy, smiling and covered in confetti.

Did I ever tell you about the first time I saw the Lips live in concert?

It was in Boston and it was one of those concerts with many, many acts and the Flaming Lips were second-to-last.

I guess you could say that the Boston crowd did not quite "get" the Flaming Lips and it was the first time I have seen a band actually get "booed."

Cross that off my list of things to see before I die.

But even though they did not have the crowd in the palm of their hands I was smitten with these weird, weird musicians and I went out and in true Aries fashion bought all of their albums and listened to them constantly and became their number one fan, familiarizing myself with every obscure b-side they had ever produced and pooh-pooing those who only knew about them through their song "She don't use Jelly."

I was soooo much cooler than that.

Imagine my delight when a couple years later they came to Maine and YES! my fellow Mainers (unlike the Boston crowd) embraced the Flaming Lips with all their eccentricities and a good time was had by all.

I even got to meet Wayne Coyne after the concert (he was covered in fake blood and quite sweaty, I assure you).

I asked him why he didn't sing the "Jack White Fiber Optic Jesus Song."

And Wayne Coyne looked at me like I was the crazy one.

Long story short they are coming back to Maine in October (hurray!).

So, look out, dear girlfriends: you are soooo coming with me to this concert and we are stalking the back alleyway outside the State Theater afterward so I can meet Wayne Coyne...