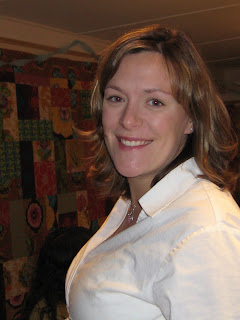 It is snowing outside to beat the band. Beautiful, big, fluffy snow.

Not unlike one day this past December when we had a Baby Shower at the store for my good friend Erica.

Erica and I met when she was in one of my Turning Twenty classes. She's one of those gals who just came into the store one day and then never went away. I've said it before and I'll say it again, I would have NO friends if it weren't for all the great people I meet at the store. I am very lucky that way. 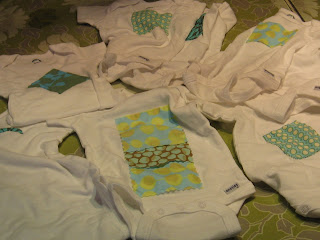 Anyhow, at Sewing Lounge about six or seven months ago, Erica announced that she was expecting and we were all delighted and started planning her shower right away. Erica isn't one of those gals who would have wanted a "SURPRISE!!!" shower, so we gave her the heads up about what we were doing. I'm so glad we did, because she was able to invite some of her "New-to-Alewives" friends and they were able to come celebrate Erica's expected arrival on that snowy day in December. 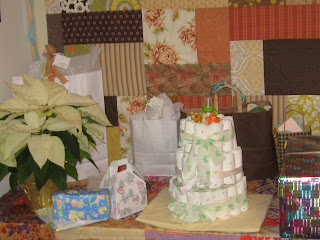 We ended up hand-appliqueing little shapes onto lots of One-sies. You can never have too many One-sies, right? It was really fun: we sat around stitching and eating and gabbing and laughing and gifting and asking Erica all kinds of questions that were probably waaay too personal. But, she's a good sport that way. It was a really fun afternoon and I will always have a warm and fuzzy memory about Erica's baby shower.

A few short weeks later, little Cora was born to a proud Mom and Dad.

All three are doing great (especially Erica who is looking MIRACULOUSLY like her pre-pregancy self... in other words, very thin!!!). Once I knew Cora was a girl I made a trip to the hospital to visit the happy family with some Pink schwag in tow. 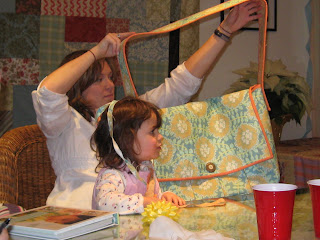 She will be very fun to sew for.

In the meantime, she has a healthy supply of Turqouise One-sies.

See you again soon: stay warm and dry, too! 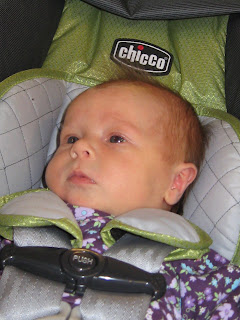 Rhea - sweet! Where did you buy the onesies?

I'm going to just come clean and tell you that I got them at JoAnn's.