Catching Up on Everything!!!

Starting to get caught up with everything... 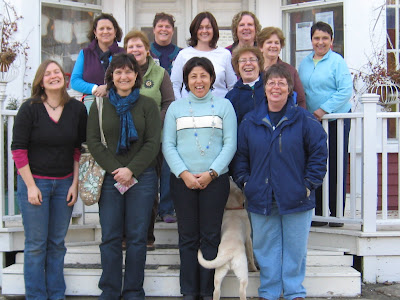 This is a picture of our class from the Mystery Quilt Weekend.

You can see the little puppy rear end there is Cooper, our neighbor's dog.

I was glad he came along because he really made the ladies smile!

I was going to post pictures of what the finished quilts looked like, but then it occurred to me that anyone who takes this class in the future would also know what the quilts looked like and that would defeat the whole purpose of a Mystery Quilt!

So, I don't want to ruin any other shopkeeper's future Mystery Quilt fun.

While I would like to think that no one out there would try and cruise the internet for pictures of what their Mystery Quilt is going to look like when it is all finished, I had a dose of reality when I found out that not one, but two (TWO!!!) of my students did JUST THAT.

But, they were unsuccessful.

I won't name any names as to who the students were that tried to cheat, but there initials are JULIE and GINNIE!!!


Here are some pics of the big storm that happened the weekend after the Mystery Quilt Class... 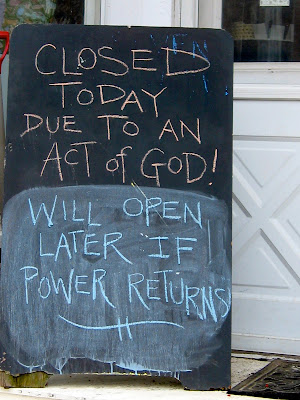 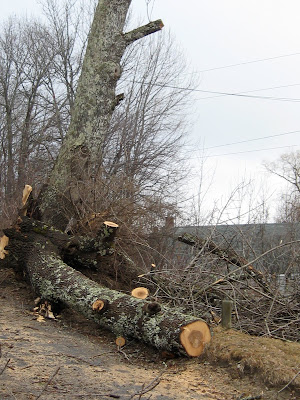 And something not so funny: this is only about one fifth of the tree that fell on our neighbor's house!


Here's a pic of their roof in all its glory: 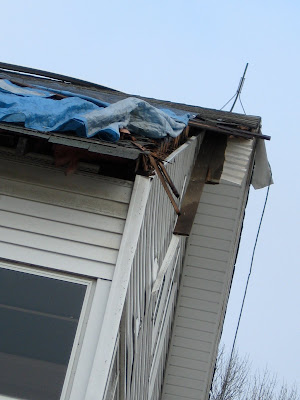 
And here are some pics from the Craft Swap which was held but held at an alternative location. 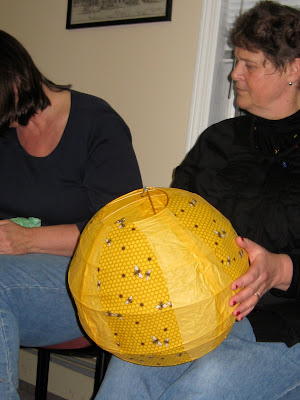 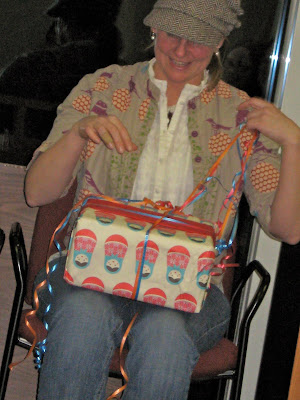 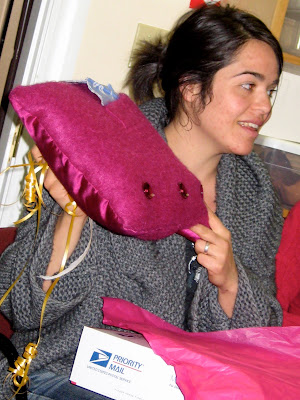 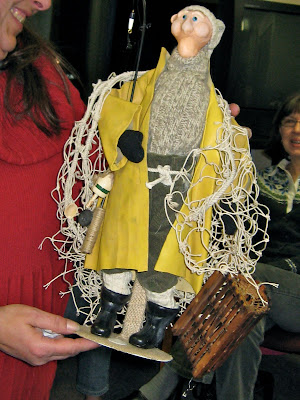 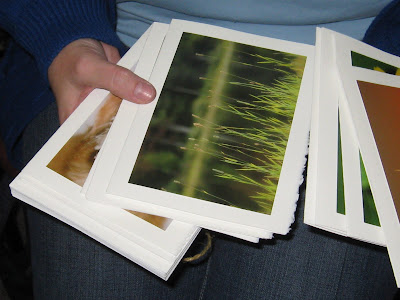 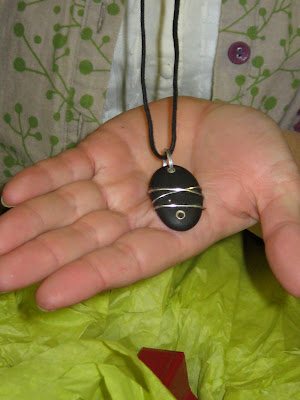 Yes, folks: all handmade, all local.

Don't you wish you were at the Craft Swap?

We will do another one in a couple of months when it is warmer weather.

Here's what I made for the Craft Swap that I hinted at before: 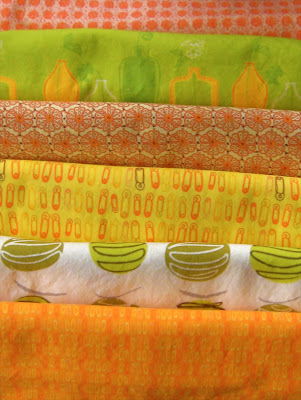 My very own fabrics printed up on Spoonflower (addictive!).

(And no, I am not pregnant: safety pins and orange and green do not a pregnant lady make!)


2 new Anna Maria Horner patterns arrived at the shop today and I just had to snag a copy of each for myself (you know, in the name of research!) 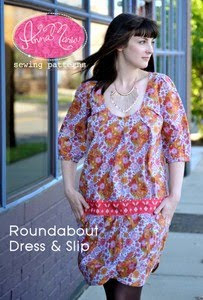 The Roundabout Dress and Slip, which I have to write more about and share a picture of the back of the pattern, because the silhouette of this garment from the cover does absolutely nothing for me, but I suspect that the real-life garment is AMAZING. 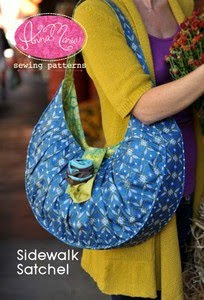 And the Sidewalk Satchel which I am also enamored with.

These are not up in the shop yet, but they will be soon, I promise.

So, that's pretty much it and I think you are all caught up.

Even if I am not.

Speaking of not being caught up...

Between you and me, I told Mom today I was terrified I was going to forget to do something for the shop and that something bad would happen.

Thoughtful silence on her part.

And then she said "What are you afraid is going to happen?"

Thoughtful silence on my part.

I flashed back to when I was in Design School and we were doing our embossing assignment and after days of preliminary work I was at the part where I actually had to dive in and do the embossing.

I stared at the paper and at my embossing tool.

Then I tentatively raised my hand and told my teacher that I was too scared to start.

He looked at me (there was probably a bit of thoughtful silence in there somewhere...) and then he said "Rhea, what's the worst thing that could possibly happen?"

To which I replied "I don't know... I could die in a freak embossing accident?"

At which point he promptly stopped paying attention to me.

And that is kind of the conclusion I came to today as well, when forced with my Mom's similar question.

I guess nothing could go so wrong at the Shop that I could not recover from it nicely with a hot bath and a glass of wine and perhaps a Creme Brulee.

So I am officially giving myself permission to chill out.

In other news, Ollie and I are loving the show American Pickers.

If I can't go Flea-Marketing yet, then watching this show is the next best thing.

Also I am loving the song about "cousins" by Vampire Weekend.

And now you are all caught up!

Rhea, that definitely sounds like all caught up. I heard the mystery quilt class was a great time! And I'm so sad to have missed the swap!! Hubby was out of town, but love the peek at the goods. I will hopefully be able to make the next one. And love your Spoonflower fabric! I have been dreaming of doing that for awhile, but I'm not a computer graphics sort of person and haven't really had the time to even try to figure out how one goes about preparing a file to upload to Spoonflower. Maybe one day. Glad the tree missed you, but your poor neighbors!

Ha! My hubby & I love American Pickers too...did you see the guy with the White Castle restaurant in his yard?!

Your Spoonflower fabrics are beautiful!! What fun.
Also, great interview on SouleMama! I sure hope you get a lot of biz from that b/c I know if I read that, I'd want to rush to Alewives. So glad you're here in the Midcoast.

Can't wait for those AMH patterns to hit the online store (and see pics of that dress worked up!) Love your fabrics!

and I love the group photo..wish I could be there

and I love the group photo..wish I could be there

You lost power too!? My parents did as well. That is life in Maine! :) (One thing I don't miss...) However, you have so much more light in the winter than we do so much further north... The class looks like a blast! You have been busy! W*O*W your very own fabric!!! They are marvelous!

your patterns are divine! if you sold these fabrics, i would totally buy them! (*cough*aftertaxseason*cough*)