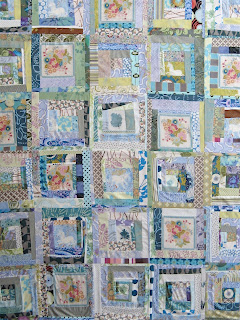 What do you think?

Modern, traditional, or both?

Recently I have been having a discussion with a member of our local quilt guild that has really gotten my wheels turning...

The discussion basically boils down to this:

What makes a "modern" quilt?

When Denyse Schmidt was here a couple of weeks ago, I was so pleased to hear her echo this sentiment, the idea of which could not be more beautifully illustrated than in her latest book, which, ironically enough, is entitled Modern Quilts, Traditional Inspiration.

If you study some of the prints we carry by "modern" designers, you'll see that they are often riffs on vintage fabric designs that have been recolored and revived into a "modern" palette.

Take a look: Jennifer Paganelli, Amy Butler, Denyse Schmidt... they are all reinterpreting historical designs to have a more contemporary sensibility.

So, where do we draw the line between "modern" and "traditional?"

The conclusion I have come to is that "modern" quilting means taking the best ideas from "traditional" quilting, but then reinterpreting those ideas to suit today's quilter.

That may mean eschewing the traditional idea that every quilt needs a "light," a "dark" and a "medium" (or any contrast at all for that matter), in favor of a more "blended" grouping of colors.

It may mean that you use large prints in small applications.

It may mean that your points don't have to match up.

It may mean that you use a fabric other than quilting weight cotton.

Wait a minute, though... doesn't that sound like I'm describing the very origins of quilting itself???

Back in the day, these ideas had to be adhered to in order to preserve fabric and get the most from every last scrap to keep your family warm.

Today, though, these ideas are followed to express one's creativity.

And one more thought...

I believe that since quilters who identify themselves as "modern" are more likely to ease up on some of the "traditional" rules, they are also more likely to have a positive, encouraging experience.

This may explain why there seems to be a rift between "traditional" and "modern" quilters.

I've heard a lot of new quilters (who would most likely identify themselves as "modern") complain that their local, "traditional" guilds and even some "traditional" fabric stores just aren't friendly, and they make them feel as though their quilts aren't real or don't merit any attention because they weren't made using traditional skills and ideas.

My discussion with the local guild member has lead me to draw my own conclusions about what "modern" means, but I would also like to ask for your help:

What do YOU think makes a "modern" quilter or quilt?

What do YOU think of "traditional" quilting methods and quilt guilds?

What an awesome post and timely too. Tonye Belinda just arrived from Portland Oregon to teach a workshop at Lily's next weekend. She has a huge following out west and hand appliqué and hand quilting are her techniques of choice. Hand sewing is tradition in its finest, but Tonye is anything but traditional in her designs and choice of colors. I think modern means freedom. Freedom to let go, even if it takes you back in some weird way to where you started. Freedom to embrace the journey.

Modern Quilting is all about fabrics: boundless liberty in combining fabric designs and colours with patterns, most likely resulting in a non-traditional and sometimes choking-to-the-eyes scheme. Although I would not mix fabric textiles, such as cotton and linen, I respect that a Modern Quilter may pursue this approach. After all, how different is this from Crazy Patchwork from the past when Quilters would combine silk and velvet with more humble fabrics? Modern Quilting is also about efficiency in execution that reflects our lifestyle to Go, Go, Go!
What Modern Quilting is NOT is sloppy execution such as points not being pointy. Modern Quilting is NOT a license to camouflage poor workmanship. This is where I draw the line.
My thoughts on a crisp, sunny Sunday morning from North of the border.
Diane C Cote

Aha! But you raise an interesting point, Diane! Where do you draw the line at sloppy? Is it okay to create a quilt that some may consider sloppy if you still love it? Is it okay to embrace imperfection if you're still creating something that's durable and will stand up to many washings? What if you're making un-pointy points on purpose?

There are very few quilts i do not love. So many genres out there. sloppy to some might be freedom of expression to others. I love playing with material in almost any form. I see the beauty in traditional and love making that sort of quilt. Also love whimsical. I've come to like color combos i never thought i would, designs i never thought i would, etc! Critiquing is different than criticizing i think

Hmm I have seen debate about this before and have no particular strong opinion on it myself... I am a total beginner in the quilting stakes. But I think it's an interesting observation that many quilts have been improvised from un-coordinating and varied fabrics since quilting has existed!
Anyway what I was really struck by was the visual similarity of the quilt photo on this post to my own very first quilt that was inspired by the Alewives 'La La Log Cabin' quilt 'unpattern'. A bit uncanny! And mine's made from all sorts from linen to barkcloth to voile. I don't know if it's modern but it's pretty and warm and snuggly :) You can see it here if you like: http://lempobee.blogspot.com.au/2011/05/qfols.html

Oh wow, they do look similar, Jane! Great minds think alike: that's my second ever La La Log Cabin up at the top of this post. I mixed a lot of different fabrics, too. I love Log Cabin squares. I think besides just plain squares, Log Cabins are my fave.

Oh I'm glad you had a look! Honestly at a glance I keep thinking your quilt is mine ... love your taste :D

I think modern quilting may be defined but what it's *not* - it is not a traditional pattern, perfectly executed with points that all match up, using coordinating fabrics from the same design line (think McCall's quilting magazine and similar). Modern quilts break the rules in at least one way, and infuse a sense of artistic individuality into the quilt - even if it's just logs that are set randomly askew, or combining unexpected color combinations, or patterns re-interpreted.