I wanted to tell everyone about a special exhibit that was at Maine Quilts this year.

It was the most powerful art exhibit I have ever seen in my life, and tackles a subject that effects everyone in one way or another but has a special significance for me.

And the way they tackle this subject has special significance for me, too...

The Alzheimer's Art Quilt Initiative is a grouping of art quilts made by different individuals based on their experiences with Alzheimer's patients. Each quilt was accompanied by a story from the quilt's creator and some sobering facts about the disease.

The Alzheimer's Art Quilt Initiative (AAQI) is an Internet-driven, grassroots, totally volunteer effort to raise awareness and fund research through art.... All profit is used to fund Alzheimer's research. Since the AAQI began we have raised more than $285,000 for Alzheimer's research. The AAQI currently administer two major programs. The first is a nationwide traveling quilt exhibit called "Alzheimer's: Forgetting Piece By Piece." It contains 52 quilts each interpreting Alzheimer's in some way. So far, more than 200,000 people have had the opportunity to see this exhibit.

The second is the "Priority: Alzheimer's Quilts" project, so named for the urgent need for research dollars and the requirement that these quilts must fit into a cardboard USPS priority mailer without folding. They are small works of art no larger than 9 inches by 12 inches, auctioned on the first day of each month... or sold outright on the Internet or at selected venues across the United States.

The art quilts from the "Alheimer's: Forgetting Piece By Piece" exhibition were on display at Maine Quilts this year.

I was only able to look at one of these quilts.

The one quilt I looked at was a portrait of a ballerina ( a picture of the author's Grandmother when she was young) that was made up entirely of tiny little squares. From far away, you could see the ballerina clearly but when you approached the quilt and looked at it up close, you lost focus.

It was very easy to see how this concept related to Alzheimer's.

Later on that weekend I met Ami Simms, who is the AAQI's show coordinator.

I only got as far as saying Thank You.

Then I started crying in the middle of the civic center and I had to leave and walk laps around the building to calm down.

My Grandfather has Alzheimer's disease, and as confusing and difficult as I know that must be for him, the person I feel even worse for is my Grandmother Florence, because she takes care of my Grandfather.

She never compromises his care or his dignity, and I know it is a frustrating, thankless job for her, but I see every day how much she loves my Grandfather.

Every time he asks a question she answers him honestly, even if that question is

"When are we going home?" when they are in the house they've lived in for 60 years.

"Where are my parents?" when his parents passed away decades ago.

Or "Where is Florence?" when she is right there beside him.

I don't know how she does it.

These are the things I thought about as I was circling the Augusta Civic Center, trying to compose myself.

And I thought, if I could channel those thoughts into a quilt, I would do it.

But I don't want to channel those thoughts into a quilt.

I wanted to deal with things in my own way and write about them here, to make my peace with my Grandparent's situation and just put it out there for everyone to read...

I'm proud of how my Grandmother faces the hand she has been dealt.

If I am ever in her position I can only hope that I would act with half the grace that she does.

And if I am ever in my Grandfather's position... I would want to be treated the way she has treated him.

So, this is my way of saying Thank You to Ami and to everyone who poured their hearts and souls into the AAQI.

To say that I was touched would be a huge understatement.

I was moved, and I was comforted.

I encourage each and every one of you to visit the AAQI site and learn about the project for yourself.

And if you are ever able to see the quilts in person, be prepared for some powerful art.

Thanks for listening, and I will be back soon with some lighter fare, I promise. 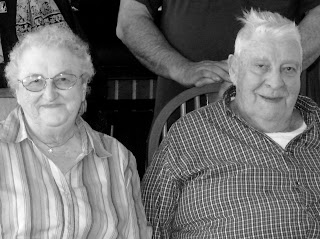 On beahalf of the artists whose work is shown in the traveling exhibit, "Alzheimer's: Forgetting Piece by Piece," I want to thank you for your tremendously moving post about the power of these amazing quilts.

Thank you for sharing how you felt and for letting your blog readers know about the Alzheimer's Art Quilt Initiative.

Well Rhea thanks for the morning cry! What a touching post - to read about your grandparents and your first hand experience with Alzheimer's. The traveling exhibit was so moving...if I had a close relative and first hand experience with Alzheimer's I probably would have needed to run laps around the outside of the Civic Center as well Rhea! The quilts and the stories behind them were amazing. I find it amazing that the only quilt you made it through was the ballerina quilt, that was on of my favorite ones - I thought it captured her story so well. I have such a love of dance was automatically drawn to the ballerina image. My hat is off to Ami for organizing such an amazing project and bringing it so close to my home. Thank you - and Thank YOU Rhea for such a touching post about your grandparents - what an amazing example of life-long love.

thanks for sharing your thoughts and experiences with all of us.....your words are powerful & hit home for me (in a different way) as well.

the quilts must have been very powerful, I wish I could have seen them. My grandmother is in the start of Alzheimer's and it is very hard to watch her make the transition. She knows that she doesn't know anymore. My mother, Pam Hardy, has taken great care of my grandparents. I don't know how she goes to see them everyday when I know she will be asked the same questions and has watched them slowly change from being alive to just living. I also worked at chase Point and helped in the Alzheimer's unit for a while. I watched my favorite patients go from a person to just a shell, it broke my heart every time.