Something you don't see every day

Jessica and I were working at the store this past Saturday when the neatest thing happened.

Two gals (I'm guessing mid-twenties) walk into the shop with their mother.

The two gals are twins.

I'm not sure if they were fraternal twins or identical twins, but let's just say there was a strong resemblance.

The two gals are both pregnant with the cutest little baby bumps you have ever seen.

Upon further investigation, Jessica discovers that not only are they both pregnant, they are both due on the exact same day.

I was reeeaaalllyyy shy to ask them if I could take their picture for the blog, but Jessica encouraged me and I did.

I was reeeaaalllyyy excited when they said yes and that is why this picture is so crumby. 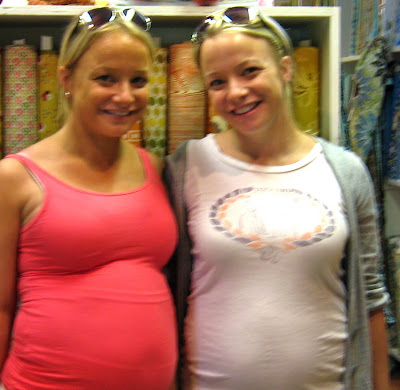 Are they not the cutest girls ever???

Thanks Julia and Emily for letting me take your picture.

And for coming in the shop and buying some of the coolest fabrics ever.

I am sure you will love your baby slings and curtains.

The girls are due at the end of December: one with a boy and the other with a girl.

Don't ask me which is having which,because I forgot.

It was just a nice, positive thing to have happen on a Saturday morning.

Something you don't see every day.

Rhea at Alewives
Posted by Rhea Butler at 1:54 PM

You certainly don't see that every day and both having babies at the end of December - how amazing. I wonder if they chose the same fabrics?

Wow! How weird IS that?! How fabulous for a close family though...that makes me jealous actually!

Acccctually, they DID buy the same fabric!

(but in two different colorways)

Fascinating I tell you!!!

hey! My Mom just sent me the link to your post ;) thanks for being so helpful on Saturday. Our friend actually told us about the store, and my Mom is a total fabric snob and was very impressed with all your fabrics. She's leaving for China today so didn't get a chance to make the slings/shades yet, but I'm dying to see them. And I think I'm going to get more of the green/blue fabric for the future nursery, I'm falling more in love with it the more i see it.

Thanks again, Julia (the one on the left in the picture ;) )