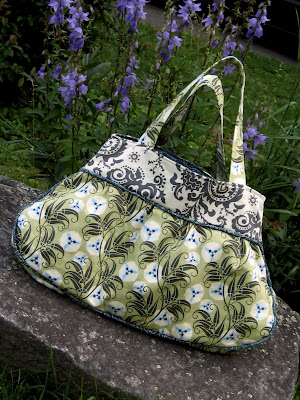 I'm reporting from the Field...

I've just finished making one of Amy Butler's newest patterns - just in time for the really big shooow, too- and I thought I'd do a little pattern review.

First of all, if I am being honest, this is probably not a good choice for a beginner.

There are a lot of layers, so the going is slow.

The stab-ability quotient is very high on this one.

I had a few war wounds and a few sailor words.

This is a good bag for somebody with a few bags under her belt and someone who wanted a bit of a challenge.

I hope I'm not making this bag sound impossible (far from...) but I do believe you should know what you're getting yourself into.

I did all of my cutting in one session (If you know me at ALL you know that cutting is my least favorite part of any project) and then set the bag aside for a few hours.

Later on that night, I picked it up again for the "FUSING of the LAYERS."

Like the Birdie Sling, this bag uses many, many layers of one type of interfacing. 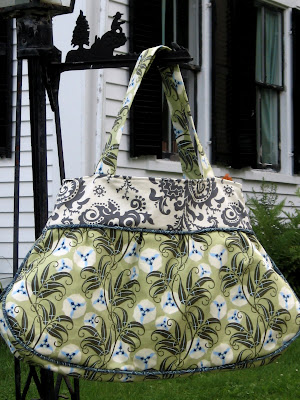 Instead of using many layers of fusible woven interfacing I took a tip from my good friend (and fellow fabric shop owner) Peggy Anne and I used canvas.

I just cut out one canvas piece for every three woven interfacing pieces and called it a day.

I also wanted the bag to stand up on it's own so I added a layer of Craft Fuse.

I fused the Craft Fuse to the canvas and then basted everything to the cut fabric pieces.

It was around this point that I realized I was probably my own worst enemy, but I kept on trucking anyway.

If you are making this bag I wouldn't strictly recommend following my canvas v. interfacing lead.

What I ended up doing was probably just as time consuming as cutting out three layers of interfacing.

Perhaps even more so.

It was easy for me to follow my own particular brand of madness, but I don't expect other people to be dragged down with me.

So, anyways, next up (after the cutting and the fusing) was the CORDING!

Be not intimidated by the cording.

Just get thee to a zipper foot!

Don't even THANK about tackling this bag sans zipper foot.

The hardest part of this bag (for Moi) was sewing the bag gusset (more commonly referred to in the pattern as the "bottom panel").

This was probably because I didn't cut the cording away like Amy told me to. 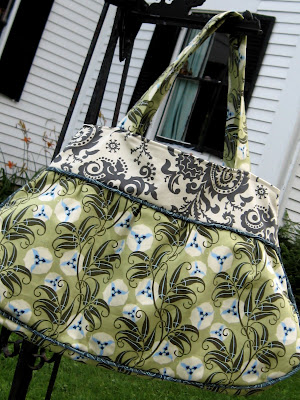 I have a super-heavy duty old machine and I thought it would sew through the cording like butter but I buh-ROKE two (count 'em two) needles.

That was dumb of me.

It probably would have gone in as smooth as silk if I had done what Amy says but that's no fun, right?

This area where the cording meets up kept reminding me of when I was reading the book Memoirs of a Geisha.

(Stick with me here).

In the book, they describe the hair-do of the apprentice Geisha (the Maiko, I believe she is called) as the "Split Peach."

It is supposed to be a very suggestive hair-do and for some reason the shape of the bag where the bottom panel joins to the cording reminds me of the Split Peach hair-do.

Other than that the bag was not hard at all.

I would love to make another one and I'm so glad I have this one to take with me to the quilt show.

I did the Field TOTE, which is the Field BAG only without the zippered panel on top.

The tote has no closure but if you wanted to you could put one of those magnetic closures in there slick as a whistle.

I am going to try my next Field Tote WITHOUT the bottom panel.

This would not only be super cute, but super quick and easy as well.

I am really congratulating myself on that particular breakthrough, as it means I only need to sew in ONE layer of cording.

It will not stand up on it's own, but DANG it will look good draped across my shoulder.

This is a BIG bag.

Oooh, sorry about that.

Alright, pattern review is over.

Hope this was helpful and I will see you again soon!

Okay missy, I am so jealous you did this thing in 1 day! I have been working on it with both my mother and mother in law and it's a hilarious catastrophe of epic proportions - mostly because we 3 goof balls keep messing it up. Your finished bag is beautiful though and gives me hope that some day I will finish mine as well.

Thanks for saying the bag isn't for beginners. I love Amy's bags, but I admit that the pictures on the pattern cases intimidate me. For good reason, I see. Have you done any of hers that you would say a beginner could handle?

It was not in one day... more like three major sessions over two days. And remember, I am a "professional."

For an absolute, super-duper beginner then I would recommend the Chelsea Bag or the In Town Bags.

Then the Birdie Sling.

No zippers, no buttons in any of them.

The Chelsea Bag was the first one that I ever made... and it's reversible!

i love you. you are funny and honest and ALWAYS TOLERANT OF MY CHILDREN AND RAMBLINGS. you can even make a pattern review completely fun and entertaining. is there no end to your talent?

Yay! I finished mine. It's a gift but after all that effort I want to keep it. Your tips were really helpful. I think I might do the Birdie Sling next as a quick win! Here's my review and tips particularly for those trying to access materials in Europe