Back to basics: Ironing 101

I have been really busy lately and now I'm having Catholic Guilt about neglecting the blog, so I thought I would share something with you that I have been meaning to share for a while.

The following is an excerpt from one of my Virtual Turning Twenty lesson plans, modified a bit so it makes sense out of context.

My Virtual Turning Twenty class is going quite well, I think (hi, ladies!), but this particular excerpt from the lesson plan could be useful for anyone who quilts...

Think of it as Ironing 101 and I am your professor. I have tenure, too, so don't even think about filing a complaint!

I like to put water in my iron so it is nice and steamy.

The steam not only gives you a nice little semi-facial, sauna-type effect, but it really helps your fabrics to press flat and behave nicely.

For years and years I never used any steam in my iron, because lots of "old school" quilters will tell you that steam will stretch and distort your fabrics, but recently I have been turned on to using steam and now I find it much, much easier to press with a little steam rather than without!

Now I am going to give you a golden kernel of advice that will serve you well throughout your entire sewing career: no one ever taught me this, I think I read it in a book somewhere, and I rarely hear anyone mention it, but it will help you out a LOT when you are ironing and piecing and trying to be accurate.

See this picture below?

These are actually two fabric pieces that were just stitched together and then clipped from the machine. The seam is on the right hand side of the square. I haven't done anything to the pair of fabrics since clipping them from the machine... just brought them over to my ironing board. The two fabrics are right-sides together and you are seeing the wrong side of one of the fabrics: 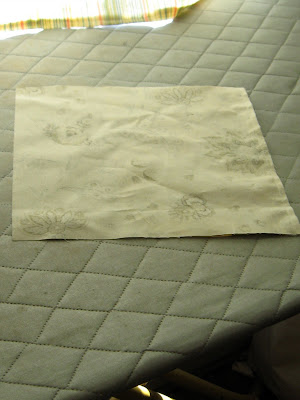 See how wrinkly this is???

Most people will tell you that after a pieced set of fabric comes off of the machine you can just go ahead and press the seam allowance to one side or the other, but I am going to tell you to "set the seam."

"Setting the seam" is just a technical term for ironing pieced-pairs exactly the way they came off of the machine...

In other words, DON'T FLIP THE PAIRING OPEN, but iron while the two fabrics are still right- sides together and the pairing that was all wrinkly before will get pressed with the iron and will now look like this: 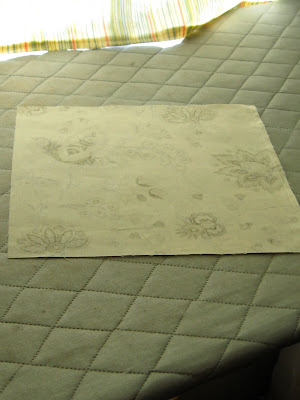 See how nice and neat it now looks?

Let's do a little before and after...

See the difference? It's the weirdest thing, and it seems small, but this helps soooo much later on down the road.

Now that I have passed on that golden kernel of knowledge and you know how to set the seam, let's flip the fabrics open, like this: 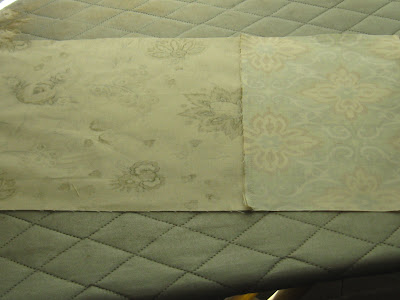 We still have wrong sides up, but we are going to press the seam allowance to one side, just like in the photo.

Go ahead and press the seam allowance with the iron.

Be careful when you are pressing that you don't create an extra crease in the seam, inadvertently making your seam allowance larger: you want the seam to lie nice and flat.

Next, we are going to flip the pair over so that the fabrics are RIGHT sides up and give it one last press from the right side: 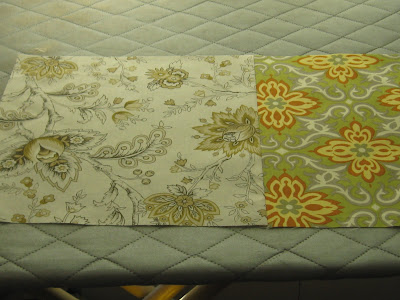 This is what you should see: a nice, flat, neat, clean pair.

It's so exciting, an accurate, don't you think?

(What can I say, I get excited by these things...)

In my opinion, careful ironing and careful pinning (which we will get to later) are JUST as important as careful cutting.

To review, ironing as I see it is a three-step process:

Step two: press the seam allowance from the wrong side.

Step three: flip the fabrics over and give them one last press from the right side.


That's all for Ironing 101, boys and girls... hope you learned something!

If you like, I can follow up with my "Philosopy of Pinning" tutorial one of these days, when I am feeling a similar combination of laziness and guilt...

I resisted setting the seam for a long time, but I found it does make a big difference! But I still prefer pressing it open-seems to make it much flatter

Rhea:
Thanks for the ironing tips. I love to iron. I am an Aries as well!

hi. love your blog, and looking forward to visiting your shop this summer. I agree, ironing is an important part of quilting. I have also used steam forever, never having a piece get out of whack like I have been told can happen. In my classes though, I teach my students to press/ direct the seam on the right side of the fabric after setting the seam. For garmebnt sewrs it feels weird, but it avoids one from getting that crease that once steamed, is hard to get rid of.

bring on the pinning lessons!