Happy PumpkinFest to you!!! 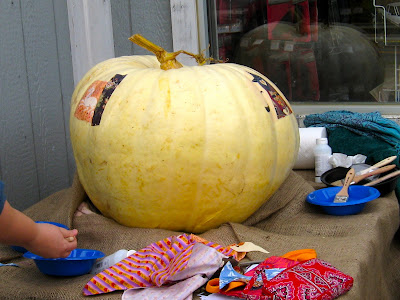 Mom and I completed phase one of our giant pumpkin for PumpkinFest this morning. 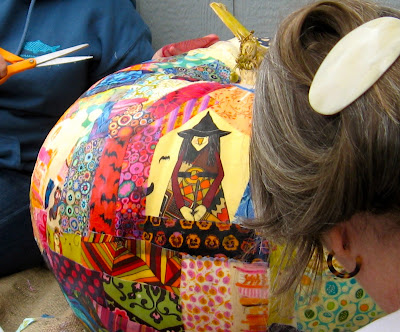 Every year, on Columbus Day weekend, our town gets all Pumpkin-ed out for PumpkinFest.

It's a "Damariscotta thing."

Among other things, people actually make BOATS with motors on them out of the giant pumpkins md then they get in them and ride them around the river.

Did you ever used to watch that show "Gilmore Girls?"

Instead of Knit-a-Thons and Revolutionary War reenactments we have Pirate Day, Woofstock and Pumpkinfest.

Although I would like to say for the record that I think a Knit-a-Thon is a very good idea.

And actually we do have Revolutionary War reenactments.

So I guess I don't know what my point is. 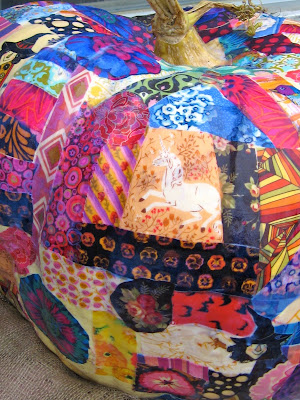 Anyways, I say this is only "phase one" of our pumpkin because phase two will be completed tomorrow, at which time I will post more pictures.

If you are a local you should come see me do my pumpkin thang around noontime tomorrow at Clark's Auto Parts (NAPA) out on Old Route One.

If you do you should bring me some cocoa.

Here's a picture of Jessie's super-cute little boy Blake with the pumpkin. 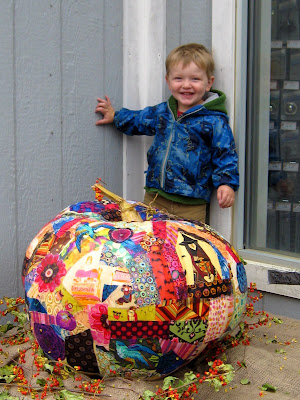 Here's a picture of me looking like Saint Rhea of the Order of the Perpetual Pumpkin. 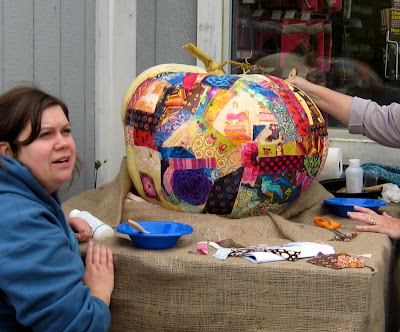 The giant pumpkins are not as giant as they normally would be, because this was a reeeaaalllyyy tough growing year with all the rain we got in the Spring.

But I think you would agree that this pumpkin is still pretty large.

I will be back and post some pictures of our finished pumpkin and other people's pumpkins, too, and give a little "How-we-did-it" tutorial that you all can do with your pumpkins at home.

Just to let you all know, I have not forgotten about the Oliver+S School Days Coat I promised to make. The coat is well underway but I have run into a "toggle" situation. Mainly that I couldn't find any. I did eventually find them and have some on order but until they come in I am at a stand still.

The good news: the coat has been really easy to make so far... no buttonholes, no zippers... smooth sailing and a real pleasure to work on.

The bad news: I have said the word "toggle" so many times now that it no longer holds any meaning for me.
Posted by Rhea Butler at 11:39 AM

I would love to go there...please more photos..
love you pumpkin, Nila and I love
Halloween , is not very big here but we will go to the Uk next week, so we can catch the Halloween feeling

Just a quick comment from BK.
A) LOVE the pumpkin. It rocks!
B) Wedding jacket is GORGEOUS! SOOOOOO perfect. Totally love it!
C) LOVE all of your drawings in the newspaper ads that you do!
D) Cowgirl is still my fave.
E) Love your Busy Thimble finds.
F) Miss you, talk soon!

I wish I was a local, your town sounds like lots of fun (and I love that town at Gilmore girls). That pumpkin looks great!

I like your pumpkin!! I want to make one like that with my kids. wow.
And I just gave you an award. Go see: http://sunnespot.blogspot.com/2009/10/kreativ-blogger-award.html
Robinsunne

I love the pumpkin! And oh how I wish I lived in Maine so I could visit your store in person..... ~drool~ lovely lovely fabrics ;)